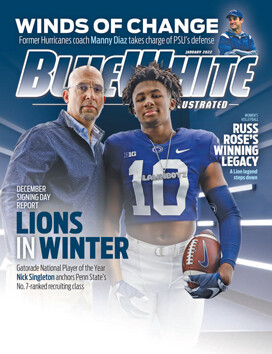 The January edition of Blue White Illustrated features a recap of a momentous December signing day for Penn State. The Nittany Lions signed On3.com’s No. 7 class, restocking their roster with some of the top high school prospects in the country, including a pair of five-star players in quarterback Drew Allar and running back Nick Singleton. Also in this issue:

Subscribers to BWI Magazine will automatically get this with their subscription. Click here to start an annual Subscription!

Save this product for later
Display prices in: USD