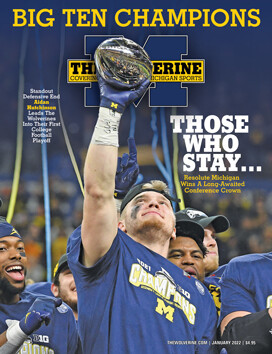 SKU 1004-Jan22
$8.00
In stock
1
Product Details
The January 2022 edition of The Wolverine features Heisman Trophy runner-up Aidan Hutchinson on the cover, after he helped lead the Wolverines to their first Big Ten title since 2004. In addition to recapping U-M’s championship run, this issue includes:

Ships FREE within the U.S. via first class.

Save this product for later
Display prices in: USD